Too Big to Pay 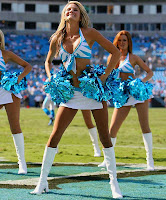 This will bear watching (and not in the way you may be thinking):

Carolina Panthers owner Jerry Richardson is asking the City of Charlotte and the state of North Carolina to each pony up $62.5 million so he can renovate his 17-year-old stadium. Richardson has graciously agreed to pay $62.5 million himself toward the total renovation costs of $187.5 million.

Why shouldn't the owner of this NFL franchise pay the whole amount? Why should taxpayers pay? Richardson's answer to that question was commendably frank and revealingly blunt: Team owners don't pay for these things because they don't have to. Everyone, apparently, wants an NFL team, so taxpayers are expected to pay, and usually they do.

Apparently, the City of Charlotte has already committed to its $62.5 million share. So far state House Speaker Thom Tillis and other Republicans representing the Charlotte area have shown no willingness to go that route. Perhaps they've calculated the uproar that would follow.

Tillis's statement needs close parsing:  "I've been clear with the Panthers organization that it is not appropriate to have state taxpayer dollars go directly into the stadium."