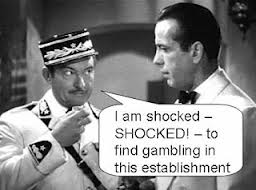 Every politico in the known universe is all a-Twitter this a.m. over The Memo. Haven't read it yet, but I will. In fact, I just printed out the entire thing to study, highlight, underline, and annotate.

Democrats in general and progressives especially are usually the last ones to catch on that there's a war and that they are in the crosshairs. Glad to see someone thinking strategically, which is what conservatives normally do over their Cream o' Wheat.

The fake shock of those same NC conservatives over this particular memo is not convincing. They've been reading their own memos for years. It's not as though the American Legislative Exchange Council (ALEC) and Americans for Prosperity and the Civitas Whatsit haven't been producing central steering command documents for NC Republicans for a long time. And we see the results.

The results are the point, O my brethren, and if the Republican grandees in Raleigh think we're just going to sit back and mumble our Rosary as they enact their radical program, they're smokin' something with their Cream o' Wheat.

And it didn't take a memo from some consulting group for some of us to see what's going on in Raleigh.

ADDENDUM
Got home late today to discover that Gary Pearce also wrote about The Memo and made some of the same points, only better.

You are a chicken shit. Coward! You could not handle moonshine!