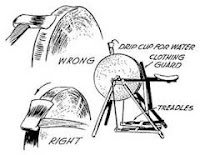 Senate Bill 39, which was filed yesterday in Raleigh, would restore partisanship to state judge races ... not that there wasn't already partisanship (witness Supreme Court Justice Newby), but apparently every registered Republican in the state wasn't getting the memo, so the Honorables intend to hang a "D" or an "R" around the neck of every judicial candidate.

Why do people keep claiming that Republicans know how to manage money?

Wonder how managers of North Carolina's hospitals feel about this dickishness? The dickishness of dictators with so many axes to grind that they need a bigger place to hang their axes.
At least The Congregation has retired for the weekend, and, as Molly Ivins used to say, every village can now reclaim its idiot.