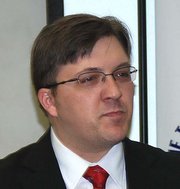 To get the gist of what's to follow, you need to do one piece of homework on Glen Bradley.

Bradley was one of the new Tea Party crowd elected to the NC General Assembly in 2010. He's was so far out there that Republican Thom Tillis quickly pegged him as an embarrassment (mainly, to his own self-image), so none of Bradley's legislative dreams went anywhere.

Then the Party honchos redistricted him out of his own district, one of a very small handful of Republicans dissed in that way by the leadership.

Bradley promptly filed to run in his new Senate district, lost a primary against a more popular Republican, and has now thrown his hat into the ring to become a high officer of the North Carolina Republican Party.