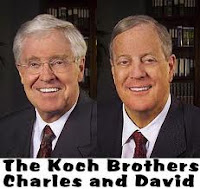 Politico.com has a story up this morning about the struggles of Charles and David Koch, the billionaires who laid out boatloads of $$ to defeat President Obama last year and who have nothing to show for their expenditures (except a stranglehold on North Carolina and other similarly gerrymandered states).

The Koches began firing people at Americans for Prosperity, one of their flagship front groups, and rejiggering some of their many other front groups, like Generation Opportunity, American Commitment, Americans for Responsible Leadership, Americans for Job Security, the Center to Protect Patients Rights, among many others. (They must have a whole division of their empire devoted to just coming up with bland or positive-sounding names for front groups through which they intend to take control of government in this country.)

In North Carolina, the Koches have a willing and well-heeled handmaiden in Art Pope, who runs his own Koch-lite octopus. The Koch-connected American Legislative Exchange Council (ALEC) has focused on bulldozing billionaire-friendly legislation in many states of the Union, but as that org has lost some big-time corporate sponsors, because of adverse publicity, the Koches have something else coming on line to take care of piddling state legislatures:

[The Koch brothers have] blessed the formation of a new secret money nonprofit group, the Association for American Innovation, POLITICO has learned. It will be run by former top AFP strategist Alan Cobb and will wage a behind-the-scenes push in state capitols for reforms consistent with the brothers’ small-government, free-enterprise philosophy, including possibly curbing union power and abolishing income taxes.

Yeah, we already know about that in North Carolina.

Just last night, Tim Phillips, the chief operative at Americans for Prosperity, thoughtfully emailed us a "sneak peek" at the front group's new "Congressional Scorecard," and we were reassured of Madam Foxx's values and alignment to see that she was rated at 95% "for the prosperous."

Yes! Thank you Virginia for being the kind of congressman the majority of your constituents voted for! You are there to represent the citizens in NC-5 and you are giving us the kind of common sense, conservative representation we want. That's why we keep returning you to office!

Take that JW. I will have to say I am a strong Republican but not a Virginia Fox fan, too much water under the dam in terms of ethics for me.