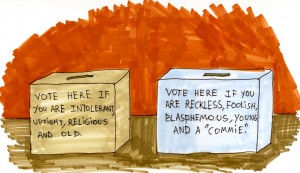 It's Senate Bill 82. It's already passed first reading in the Senate and has been referred to committee.

It's apparently deeply ingrained in Republican DNA to begin messing with voting rights as soon as they get into power. But why would they want to eliminate straight-party voting? Perhaps because Democrats generally choose the option more than Republicans do.

It's okay. It'll be my pleasure to search out every Republican on the ballot in 2014 for the pleasure of voting against him/her. The exercise will do me good.