A Cure for Political Disaffection 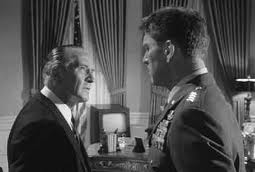 Was watching the 1964 movie "Seven Days in May" on TCM and heard this bit of astute political dialogue between a fictional President of the United States and the military general who intends to supplant him in a planned insurrectional take-over of the government. The general refers to himself by his full name as be begins talking:

General James Mattoon Scott: James Mattoon Scott ...  hasn't the slightest interest in his own glorification. But he does have an abiding interest in the survival of this country.
President Jordan Lyman: Then, by God, run for office. You have such a fervent, passionate, evangelical faith in this country - why in the name of God don't you have any faith in the system of government you're so hell-bent to protect?

(The entire confrontational scene between president and treasonous general -- with Burt Lancaster as the general -- is available on YouTube.)

Why has the general organized an armed rebellion to put the president out of office and himself into power? Because President Lyman has signed an arms treaty with the Russians, something that the general thinks weakens us to the point of being sitting ducks for Communist take-over.

This movie came out less than a year after the assassination of President John Kennedy, when possible conspiracies were very much in the air, and it plumbed a certain civic paranoia in a very realistic way. Plus it featured a great cast, including Fredric March as the president, Ava Gardner, Kirk Douglas, and a whole bunch of great character actors.

There was considerable conservative disaffection in the air in those days, particularly in the South and particularly over forced integration. Forget forced health-insurance reform, which in the scheme of things is but a blip of controversy compared to what the Kennedy and then the Johnson administrations were working to achieve ... actual racial justice.

Run for office, sez the fictional president. That's the way our Republic is supposed to work. Let the people decide whether your vision of America is their vision too.

If you can't run for office and say what you actually want, or fear, then that might tell you something about your own problems, and your own warped perceptions.

Run for Office? Just make sure you don't run as a Demo or a Repub thinking you are independent from the Corporate 1% Dudes who control both parties and want to stomp your individual rights into the Corporate Greed of Insanity..

'Not to mention the 6 megabanks that own this country and the treasonous government of both parties.

I know, I know, the MSM can make this statement, but we the people aren't supposed to, because if we do, we are labeled as kooks and terrorists.

Well, by their warped Orwellian standards, then I am a kook and terrorist.

JW, you and Pam must be in hog heaven now. Everything is going your way.

You know, Jerry, it's interesting. I've been thinking of this same movie over the last few days. And quite frankly, I've thought of it more and more over these last several years.

It's particularly striking that this movie and the characters in this story stress the Constitution and the Bill of Rights....

It's very sad that this government for many years now, of Dems and Repubs, no longer care for or adhere to these wonderful documents. And our Republic has been long since dead. It didn't fit in with a bloody, tyrannical empire.

Thanks for finding the site.