How To Energize the Democratic Base 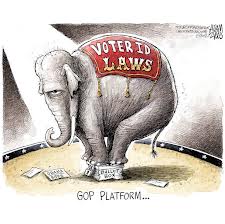 Every political activist and political observer in North Carolina expects the overwhelming Republican majorities in the General Assembly, along with Republican handmaiden, Gov. Squishy, to pass and sign, finally, their beloved voter photo ID act early -- very early -- in 2013.

We'll have to wait to find out whether they also try to shove the cost of those IDs off on voters -- setting off a court challenge which they will lose, because the state's Constitution mandates free elections -- and what extra hoops they intend to put college students through.

The new General Assembly in Raleigh is not made up of overly thoughtful people, so they aren't likely to pause to consider The Law of Unintended Consequences. After 2010, the Republicans in the General Assembly tried their best to join 35 other Republican-dominated states in hobbling voter turn-out in 2012, especially brown-skinned voter turn-out, but Gov. Perdue frustrated their plans with the veto. They're veto-proof now, but they might want to consider how voter suppression in those other 35 states ended up biting their authors in the ass.

The Romney campaign based their strategies (and their wholly off-base polling) on the expectation that black enthusiasm for Obama would be down in 2012, along with the enthusiasm among college students. Both groups were ostensibly the main targets of photo ID and other ballot access laws. But both groups defied expectations and turned out in even higher numbers than in 2008. Some think it was because they knew that their Republican-led state legislatures had targeted them, and they weren't going to take that treatment lying down (or sitting out an election).

So go ahead and do your worst, NC General Assembly, and don't be surprised at the result.

Posted by J.W. Williamson at 12/05/2012 10:15:00 AM
Email ThisBlogThis!Share to TwitterShare to FacebookShare to Pinterest
Labels: voter suppression, voting rights