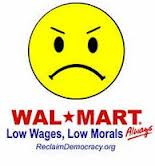 Don't you just love the smell of corruption in the morning?

A months-long investigation has revealed that Walmart has systematically used bribes to get what it wants in Mexico. Here's a key paragraph:


The Times’s examination reveals that Wal-Mart de Mexico was not the reluctant victim of a corrupt culture that insisted on bribes as the cost of doing business. Nor did it pay bribes merely to speed up routine approvals. Rather, Wal-Mart de Mexico was an aggressive and creative corrupter, offering large payoffs to get what the law otherwise prohibited. It used bribes to subvert democratic governance — public votes, open debates, transparent procedures. It used bribes to circumvent regulatory safeguards that protect Mexican citizens from unsafe construction. It used bribes to outflank rivals.

Posted by J.W. Williamson at 12/18/2012 10:05:00 AM
Email ThisBlogThis!Share to TwitterShare to FacebookShare to Pinterest
Labels: corporate power, Wal-Mart Corp.