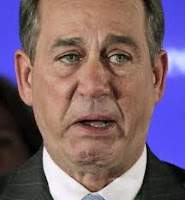 Both Virginia Foxx (R-5th District) and Brad Miller (D-13th District) voted against the Senate's "fiscal cliff" legislation last night. I agree with Foxx and Miller: that "fix" should not have passed.

House Republicans fractured, badly, and John Boehner's speakership appears to be on the line. Foxx didn't vote with Boehner and with her recent kissy-face partner, Paul Ryan, who amazingly supported the Senate deal. She voted against, following the path of that super ambitious snake Eric Cantor, and that other ambitious snake Kevin McCarthy, both of whom are clearly angling to push Boehner off his mountain. "Foxx and Cantor, sitting in a tree..."

Boehner reportedly told Sen. Harry Reid to "Go fuck yourself!" ... twice. No report yet on how many of Boehner's own Republican conference suggested he do something similar, after he informed them that the fiscal cliff legislation included no spending cuts. If Foxx didn't say it, she was certainly thinking it.

As for the Negotiator-in-Chief, we see no reason to retract our earlier estimation of his poker-playing abilities. President Obama gave away the farm, or at least a large portion of it, and the "victory" the White House is celebrating today is rotten at the core, setting up another confrontation with the Republican House in a couple of months where, once again, the president will negotiate.