Worms in the Cabbage 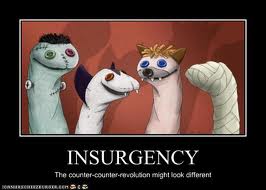 The National Republican Party's delegate rule changes (a.k.a., "The Tampa Rules Changes"), which elicited boos in Florida at the National Republican Convention in August, amounted to the strong-arming of insurgent campaigns like Ron Paul's. Paulites had out-maneuvered and out-organized the Romney machine in states like Maine and Minnesota and recruited more convention delegates that Romney. Romney, looking forward to his inevitable re-coronation in 2016, and according to The Daily Beast, bull-dozed through the adoption of some new rules to cover his right flank in a future conventions:


In an effort to get more control over the delegate-selection process in the future, Romney’s people overstepped in a way that infuriated many conventiongoers who are otherwise supporting him. Yesterday [29 August 2012], the Republican National Committee proposed a new rule that would allow the party’s nominee to overrule state conventions and choose his or her own delegates. This, many feared, would turn delegate slots into perks for insiders and donors, and further shut activists out of the process.

If this is the new rule, why have expensive primaries? Huh?

Among those loyal Romney lieutenants who helped ram through this rather significant change to the way delegates to the national convention are chosen was one Robin Hayes, former Congressman and current chair of the North Carolina Republican Party, who was by gawd apparently determined to keep his state delegation in line on this. There's existing video of him "ranting" (according to a Tea Party eye witness ... video if you're brave enough to wade through an hour of bad sound and bizarre cinematography). It was as if Robin Hayes shouted, "Respect my AUTHORI-TIE!" or words to that effect. Later, in a videotaped confrontation with disgrunted Tea Partiers at a Moore County Republican Party meeting, Robin Hayes inadvertently (it's downright hysterical, like a comedy routine) admits something he didn't intend to admit in responding to a comment from his audience:

Tea Partier: "You treated the fellow from Louisiana ... who brought in the minority report [on the rules changes] very shabbily."

Hayes: "He wasn't from Louisiana."

Anyhoo, those rule changes ("a power grab," described as "a blow to the Tea Party and the Ron Paul insurgency -- movements that have sprung up precisely because Washington insiders of both parties have abandoned the traditional bedrock principles of the Republican party, namely, economic freedom, fiscal common sense, and smaller, constitutionally limited government")  and Robin Hayes's role in getting them installed are coming back to bite Mr. Hayes in the ass.

At the state Republican Party Executive Committee meeting in Cary yesterday, apparently Hayes was under fairly direct attack. A resolution passed calling for the reinstatement of the old delegate selection rules (hell, why not? Mittford Romington is gone forever!), and if we're to believe Brant Clifton, Tea Party members managed to scuttle the ascension of one Wayne King to the Party Chairmanship. King is a pariah to Tea Partiers largely for allegedly intervening in the Republican primary for State Auditor. You can read about that here.