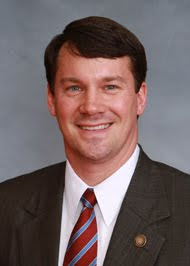 Sen. Dan Soucek was one of the stars at yesterday's Screw Gay People rally in Raleigh. People were literally thumping their Bibles in support of Soucek's proposed constitutional amendment to ban gay marriage in the state.

According to the Raleigh News & Observer, Soucek really said that he is determined to write "correct moral standards" into the North Carolina constitution.

How will we know the standards are "correct"? Because Soucek wrote them, duh.

The Soucek scheme is to get this proposed amendment through both houses of the General Assembly and then onto the ballot for public approval in November of 2012. With the economic dunderheadedness of the new Republican majority in Raleigh losing steam rapidly, the state's GOP needs something to rally the troops to the polls for the next elections. So ... why not religious bigotry? It's worked before, right?

And in case you're still giving this bunch the benefit of the doubt, that they're just well meaning throw-backs to the 19th century who ultimately mean no one any lasting harm, pay attention to what Forsyth Republican Party Chair Nathan Tabor announced yesterday: "There is no separation of church and state," Tabor told the crowd, telling them that God will judge them if they don't vote as Christians should.

Nothing like watching Taliban Natham Tabor whip up the mob into a anti-Gay frenzy instead of checking out Arnold upstaihttp://alt.coxnewsweb.com/cnishared/tools/shared/mediahub/07/21/00/slideshow_1002178552_schwarzenneger.jpgrs maid..

Oh these people are just infuriating! Can't we smite them or something?

Great, so this is what Soucek has been spending his time in Raleigh doing: crafting pointless legislation that only serves to try to shame a certain segment of the population. Talk about ineffective!!

I expect my representatives to work on legislation that will actually help their constituents. Is that too much to ask?

Glad to know he's focusing on the important issues. What a moron.

Not really a problem....he'll be raptured up on Saturday with the rest of the holier-than-thou's.

The rest of us - who are waiting for Christ to come again, instead of believing that we ARE the Second Coming - can then get back to trying to make the world a better place through jobs, a social net, and turning swords into plowshares - since grassroots aid is always a better way to make friends and influence others than just trying to kill all our enemies.

I'd check Maria's InSinkerater. That's where I'd put him.

You are plum foolish!!

A Spokensperson for the Campaign said today they were disappointed with Newt being left off the No-fly Republican Rapture List that is to occured this coming Saturday. However, The Spokensperson said the good news is that Newt previous 2 ex wifes were not on the list and is expected to make the Rapture Trip tomorrow to the Republican Paradise where they will not be involved the Campaign..When press how the Campaign knew of this event and Newt being on the list. The Spokensperson said that the Devil was able to plant a whistleblower in the Rapture movement and release the secret list to Devilleaks