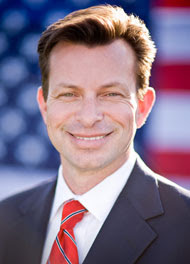 Reading about one of Buncombe County's reps in the NC House, Mr. Tim Moffitt, might make you feel marginally lucky that we have the local bobble-heads that we have representing us in the General Assembly.

One of the things Moffitt seems on the verge of achieving is breaking Buncombe County into voting districts in which Asheville's clout is disabled. All voters in Buncombe, no matter where they live, have been accustomed to voting for all County Commission candidates on the ballot. No more, under Moffitt's scheme. Voters in each district will vote only for representation from that district.

Buncombe's system has been exactly like Watauga's (and a lot of other counties). How long before some Republican operative decides that the citizens of Boone have too much influence and decide to ram through a "districting" local law for Watauga?

So perhaps we're lucky that Jonathan Jordan and Dan Soucek know how to sit in their offices in Raleigh until someone comes and tells them how they'll be voting on any given day. Instead of thinking of ways to screw people on their own.
Posted by J.W. Williamson at 5/08/2011 09:51:00 AM
Email ThisBlogThis!Share to TwitterShare to FacebookShare to Pinterest
Labels: Buncombe County, Dan Soucek, Jonathan Jordan, Tim Moffitt

You are foolish. The Democrat Party in Buncombe County is not a shinning example of good things. Looks as if most pople agree with Moffitt. The abuse of power by the Democrats in Asheville could never ever be even by the Reupblicans.

to the second anon-you're more wrong than you can even imagine. Are you a closet communist? That's what this whole idea is about-communism.

How is letting only the people of a district that are represented by an office holder vote for that office communistic? I think it is the opposite of communism. To use your logic, we should let people in Reno, Nevada vote for our county commissioners.