Dick Burr Mistakes His Thumb for a Magic Wand 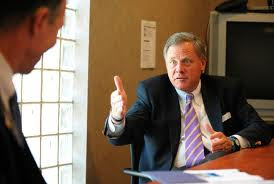 How did Sen. Dick Burr vote yesterday on the Paul Ryan plan to turn Medicare into a Republican coupon worth approximately 13 aspirin? He voted for it, natch! He's one of only 40 Republican senators who've decided to make what Jennifer Steinhauer at the NYTimes calls a "chin-out" defense of a scheme that would effectively end Medicare.

All righty then! The Ryan "end Medicare" budget is now about as popular as prickly heat in August. So deciding to lead with one's chin when one's biceps have gone soft like pudding might seem a strange sparring technique, but Burr perhaps figgers he has almost six years for people to forget where he stood on this issue before he has to stand on his record.

The Republican senators who said "no thank you very much" to the Ryan scheme and who voted with the Democrats to defeat it?

Lisa Murkowski, ever since the Palin tea partiers ran a candidate against her in last year's Republican primary, and after she won reelection anyway as a write-in candidate, has been saying "up yours" right regularly to the mullahs of conservatism ever since.

A fifth Republican senator also voted "no" on the Ryan budget, and he's a bit of a surprise: Rand Paul of Kentucky, who bears no resemblance to the other four except that he breathes air. According to Steinhauer of the Times, Paul thought the Ryan scheme was just too weak.

Lets see, that makes four Rinos that supported the bill and one person that thought it was to weak. That sounds about right. Not all Republicans are conservative.

they also voted in the senate on the PREZ. budget late last night.and not one (zero) DEMs. voted for it.who are we kiding.nothings gona happen till the election is over.there not standing for the USA, they are standing for the good old ME, MYSELF, AND I.

Out of the 535 members of the US Congress, I wonder how many are truly "bought and paid for?" With Burr and Foxx you already know the answer. But, of the remaining 533, how many?
Please don't respond with an "all." Can we possibly find even one or two who are honest?