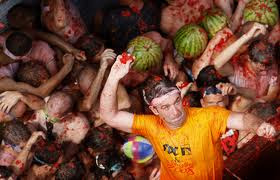 Considered negative opinions on the food-fight in the Clown College in Raleigh continue to snowball, this one by the editorial staff at the Charlotte Observer, an item titled "Penny Foolish." Hard to isolate just one short quote about the new Republican majority in the General Assembly, and their dunderheaded leaders, but this one will have to do:

"...No matter how thick the lenses on their rose-colored glasses, their solutions to a $2.5 billion budget shortfall that certainly demands some budget reductions are too drastic when it comes to public education at all levels, cuts in Medicaid for the poor, the cutoff of money for passenger rail projects and a reduction in important services for the sick...."

Posted by J.W. Williamson at 5/27/2011 07:33:00 AM
Email ThisBlogThis!Share to TwitterShare to FacebookShare to Pinterest
Labels: North Carolina budget, Republican "brand"

...and cutting state income taxes on the rich, expanding corporate tax breaks, repealing an important source of temporary revenue the sales tax, and on and on. Dumber than doggie doo--but they got elected, as Anonymous likes to keep reminding us. We will do better next time. Their national right-wing agenda on everything from gay marriage to permanent tax breaks for the rich will be stymied in 2012.

Brotherdoc, I hope you are right. But they seem to have kicked off a positive feedback cycle whereby they are concentrating so much power and money into their hands that we may not be able to get control back. As we know, positive feedback cycles (the rich get richer, wealth and power get more concentrated) will spiral out of control until the whole system collapses.

So, Brushfire, your idea of positive feedback is that power and money should be in the hands of whom--the oligarchs who control government and those who are in the government bureaucracies?

That's the way I see it, no matter which party, progressive or conservative, Dem or Repub, who seemingly control the White House or Congress, or legislatures or governor's mansions, etc. It's the ultimate concentration of power and wealth into fewer and fewer hands. And in truth, both Dem and Repub, progressive and conservative, left and right, serve the same powerful, filthy rich oligarchy.

Until we all realize that, we will get absolutely nowhere, our positions, our lot in life, will only become weaker, fighting each other.