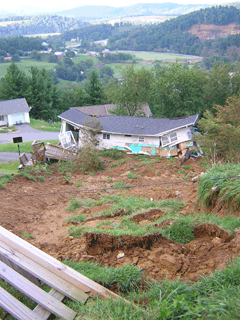 In their rush to cut anything and everything that smacks of progressive policies, the Republican NC House budget eliminates the Landslide Mapping Program. Watauga County, which has experienced catastrophic landslides with significant damage and loss to property (but so far no outright deaths, at least not since 1940), was mapped a few years ago, not that any local official will ever do squat with the warnings contained therein, other than throw the info up on the County's website for whoever has the time and patience to search it out.

Other western counties that have been completed are Macon (where five people died in 2004 in the Peeks Creek slide, during the same hurricane event that brought the house pictured here down a hillside in Watauga), Buncombe, and Henderson counties. Some of those counties has enacted county-wide steep-slope building regs to minimize the loss of property and lives.

But this is precisely the sort of "public good" that Republicans hate, because it might interfere with someone's profit margin.
Posted by J.W. Williamson at 5/04/2011 12:53:00 PM
Email ThisBlogThis!Share to TwitterShare to FacebookShare to Pinterest
Labels: environmental issues, North Carolina budget, Republican "brand", steep slope hazards

Yeah, but with Joe Furman the county "planner" I wouldn't expect too much action to protect the public. Wait, he's the "economic development coordinator" so does that not mean he's supposed to work with Keith Honeycutt and the new commission to develop every part of the county to the hilt? Especially the sides of the mountains. They are just sitting there doing nothing. Could be making money for one of our friends.

And the previous commissions didn't do so bad in the development, spending, and creating debt categories either.