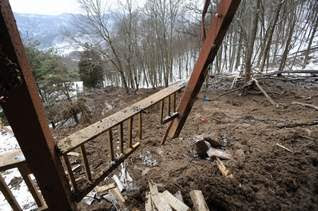 A massive mud and rock slide on a steep, over-developed slope in Maggie Valley Friday night damaged four homes and took out Rich Cove Road, a main access route to Ghost Town in the Sky amusement park. No one was hurt or killed, though that fact appears to be more luck than design. Some 40 residents were evacuated, as additional slides in the area seemed possible.

The slide may prove to have been triggered by a failed retaining wall at Ghost Town in the Sky, the management of which would have bitched and moaned about spending more money on engineering to prevent (or at least minimize) what in fact happened.

Which is also the proximate cause that no sensible steep slope regs are going to be implemented at the state or local level in most of our mountain counties. Somebody might bitch and moan about making their development safer for everyone. And those somebodies might have the deep pockets to run candidates against any legislator who even suggested regulating steep-slope development.
Posted by J.W. Williamson at 2/07/2010 10:07:00 AM
Email ThisBlogThis!Share to TwitterShare to FacebookShare to Pinterest

It wasn't too far from there, in Jackson County I think, that the locals actually supported a steep slope ordinance. I guess there weren't enough Templtonians there to disseminate lies and convince the locals it was a communist plot. Imagine that!