Foxx: So Much for Those Free-Market Principles 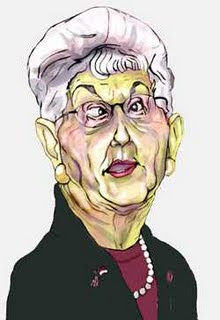 Turns out that Virginia Foxx is a gutless wonder. Yesterday she voted twice to obstruct a provision that would remove the anti-trust exemption for the insurance industry, and when those efforts to derail the legislation failed, she voted for the actual bill. In other words, in this election year she turns out to be a typical politician, watching her backside and apparently not wanting to be on record as favoring the anti-trust exemption for insurance (the ONLY industry in America that benefits from that exemption, and look where that's gotten us), though perfectly willing to do what she can to prevent the reform from coming up for a vote.

The first procedural vote yesterday was to even consider the bill (H.R. 4626) "to restore the application of the Federal antitrust laws to the business of health insurance to protect competition and consumers." Every single Republican in the House (and eight blue dog Democrats including the inestimable Heath Shuler) voted to obstruct consideration of this important reform.

Having failed to derail the reform, on final passage Foxx and most other Republicans voted for the bill, 406-19.

So what was that all about? That was about the obstructionism the Republicans have been practicing for the last year PLUS their pressing need now in this election year to keep their obstructionism and their toadying for the corporations more or less below the radar of what most voters even notice.
Posted by J.W. Williamson at 2/25/2010 10:41:00 AM
Email ThisBlogThis!Share to TwitterShare to FacebookShare to Pinterest
Labels: corporate power, health care, Heath Shuler, Virginia Foxx

I can see not many people come to this site any more. People are waking up to the problems the Dems have brought to this country and moving over to the right side.

You know, some bronzer would take care of that greenish hue, Ginny.