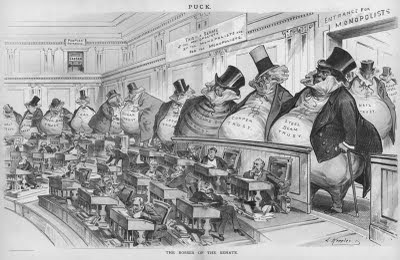 This British magazine cartoon from the 19th Century is titled "The Bosses of the Senate." The little midgets in the foreground are U.S. Senators of that day, and behind them, with the enormous appetites, are the corporations of that day, labeled variously "Steel Beam Trust," "Copper Trust," "Nail Trust," "Standard Oil," "Iron," "Sugar," Tin," "Coal," etc cetera.

This came to me in an e-mail with the subject line filled in: "Nothing has changed since this was published."

Except, maybe it's worse. Corporations can now openly and legally buy any elected official they please.
Posted by J.W. Williamson at 2/06/2010 07:37:00 PM
Email ThisBlogThis!Share to TwitterShare to FacebookShare to Pinterest
Labels: corporate power, Senate Democrats

Lieberman is a prime example of a senator bought and paid for by the insurance industry. Who wonders why there are such tough battles over healthcare? Follow the money. ;)

I find it interesting that none of the Power Trusts in the cartoon exist anymore. While you might argue that time and technology have replaced them with new Power brokers. I would counter that we still use all of the depicted "old" items; we just do not control them or lead the world in them.
Does the US even produce steel and copper anymore?

This is interesting. Direct Election of Senators (17th Amendment, 1912), was considered to be a Progressive change that would result in more open elections, less wheeling-dealing at the level of the State Legislatures, which until then elected the senators, and which as the cartoon implies, made it fairly easy for corporate interests to get a Senator chosen who would be beholden to whatever the powerful economic interests of the State were.  Progressive reforms in places like Oregon and Wisconsin led to direct election even before the Amendment, which BTW was fought tooth and nail by many Southern Senators and only went to a vote of the States because a large # of states threatened to call for a Constitutional Convention to pass it unless Congress started the Amendment process in motion.  You can read a (not very good) article in Wikipedia on this....  Point is, direct election of Senators was probably not that much of an improvement and until we have real electoral reform (free airtime for candidates, reform of campaign donation reporting, etc.) we are stuck with a bunch of paid-for patsies.  Yes, the coporate names are different but any corporation Too Big To Fail will still pull the strings.

this link has more exploration of the trust cartoon displayed only up to date.
as for most of those trusts being gone, we certainly still have coal; look at mountain top removal mining.
the insurance business certainly showed us their power with the 'health care" monster which really should have been called something else other than reform.
wall street and banking showed us who rules with tarp and its brethern.
halliburton showed us who rules with their no bid contracts unobstructed by "congress".
the list is endless. since lbj what major legislation has come down to the great unwashed for our benefit?

The more things change, the more they stay the same. Is anyone familiar with the Business Plot, brought to light by General Smedly Butler?

bridle; i have the book titled, the plot to seize the white house, about the business plot and i have smedley's book; war is a rackett.
i recommend reading them for those who believe what they hear at six each evening. prescott bush was involved in the business plot as well as being involved in funding the nazis until, as a us senator, he was stopped by threats from the rest of the senate in 1942.

also for those who insist the cartoon featured on this thread, here are three links with more info for them to consider;

Craig, I believe both those topics should be required part of the civics curriculum at every high school in the country.

bridle; just stumbled across this link in reference to the 33 coup.

now all we need to do is uncover more about the november 1963 coup.

as for reading in civics class from what i hear they teach the party line.
i had a socialogy class in high school a hundred years ago where we read; the power elite.
bet you won't find that on the library shelves in todays high schools. it exposes to much.