Doesn't This Make You Hate Politicians? 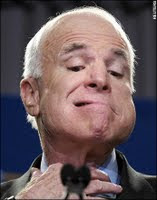 The man who "made" Sarah Palin, Sen. John McCain, has drawn a Republican primary this year from one J.D. Hayworth, who hates (in no particular order), Barack Obama, immigrants, and John McCain.

According to Jennifer Steinhauer, in the NYTimes:

Mr. McCain now finds himself jammed, moving starkly -- and often awkwardly -- to the right, apparently in an effort to gain favor among the same voters whom Mr. Hayworth, a consistent voice for the far right, [has been wooing for months as a talk-radio host].

Mr. McCain now sharply criticizes the bailout bill he voted for, pivoted from his earlier position that the Guantanamo Bay detention facility should be closed, offered only a muted response to the Supreme Court's decision undoing campaign finance laws and backed down from statements that gays in the military would be O.K. by him if the military brass were on board.

Maybe this "election conversion" will save John McCain from the hell fire of the Right Wing. And maybe not.
Posted by J.W. Williamson at 2/09/2010 09:02:00 AM
Email ThisBlogThis!Share to TwitterShare to FacebookShare to Pinterest
Labels: J.D. Hayworth, John McCain

i have seen it said that mccain gave the nation a case of political herpes with his introduction of palin to the national scene.

Good one, Craig! Sad to say the Tea Baggers are tripping over themselves to get in the Sarah line.