Another Reason for Right-Wing Extremists To Hate Evolution 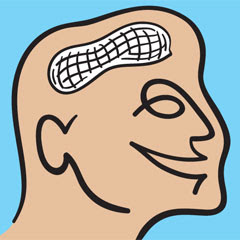 A new study published in the March 2010 issue of the peer-reviewed scientific journal Social Psychology Quarterly advances a new theory that more intelligent people are more likely than less intelligent people to adopt "evolutionarily novel preferences and values." It's summarized on the front page of ScienceDaily.

Apparently, humans are not biologically designed to stay up late, for example, for the obvious reason that our earliest ancestors had no artificial lighting. So ... "Being nocturnal is evolutionarily novel" (which makes my 19-year-old nephew, and many other college students, about as novel as they come).

Innocent enough, perhaps. But here's where the study gets political: "...humans are evolutionarily designed to be conservative, caring mostly about their family and friends, and being liberal, caring about an indefinite number of genetically unrelated strangers they never meet or interact with, is evolutionarily novel. So more intelligent children may be more likely to grow up to be liberals."

But here's the money shot: "Similarly, religion is a byproduct of humans' tendency to perceive agency and intention as causes of events, to see 'the hands of God' at work behind otherwise natural phenomena. 'Humans are evolutionarily designed to be paranoid, and they believe in God because they are paranoid,' says [the study]. This innate bias toward paranoia served humans well when self-preservation and protection of their families and clans depended on extreme vigilance to all potential dangers. 'So, more intelligent children are more likely to grow up to go against their natural evolutionary tendency to believe in God, and they become atheists.' "

Let the head-exploding commence.
Posted by J.W. Williamson at 2/26/2010 10:14:00 AM
Email ThisBlogThis!Share to TwitterShare to FacebookShare to Pinterest
Labels: evolution, liberal, Republican "brand"

I'm not sure why this comes as a surprise to you.

It's well known that reality has a liberal bias.

<span>"So, more intelligent children are more likely to grow up to go against their natural evolutionary tendency to believe in God, and they become atheists."</span>
<span></span>
<span>That would make Shyster & myself two of the most intelligent people on this blog, I believe.  :-P </span>

http://people-press.org/report/?pageid=1549 - Science by definition is liberal, meaning always questioning assumptions and testing the boundaries. That's how progress is achieved.

this explains a bunch, especially in my family where my most intelligent sister and myself are the 2 liberals.

'course we go against the last paragraph.  and you can find me in church nearly every Sunday, trying to keep the connection open between myself and the Great Mystery in the universe.  Go figure.

I am an ultra-liberal with some tendencies that may (mistakenly) be thought of as conservative.  I wonder if this would be considered an outlier in the study.  Defining exactly what a liberal is might be important, and I hope the author's of the study took this into account.  Take Gun Control for example - some say guns help people by providing protection, while some say they hurt.  The pushing the boundaries approach brought up below certainly applies here.  If one wanted to push freedom of arms as a LIBERAL theory even though it is traditionally thought of as a conservative one, does this blurr the lines of what makes a liberal and what makes a conservative?

Opinionated, your awareness that there is a great Mystery in the Universe makes me think you are highly intelligent.

Good to hear from you, shyster! Ramen, brother!
And remember to let me know when you are coming to town.

What if it is not paranoia that leads someone to believe in God but wonder and amazement?  Does that make the person more or less intelligent?

Darwin's take on the mystery = " <span>There is grandeur in this view of life, with its several powers, having been originally breathed by the Creator into a few forms or into one; and that, while this planet has gone cycling on according to the fixed law of gravity, from so simple a beginning endless forms most beautiful and most wonderful have been and are being evolved.</span>
Darwin of course did not believe in a creator who is imminently involved in the ongoing    processes.
<span></span>

Where did you find this quotation

I meant to add that I am completely in agreement with Darwin.  I do not think of the Creator as an unfair parental figure who rewards some and punishes other in a most fickle manner.

It was the closing statement of his magnum opus <span>Origin of Species. </span> The first editions made no mention of the creator but I guess he got so hammered by critics he felt he needed to placate them somehow.