The Foxx Files: How the Congresswoman Tries to Have It Both Ways 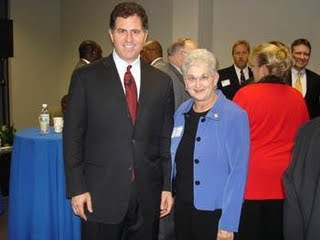 Congresswoman Virginia Foxx's indignant letter in yesterday's Watauga Democrat newspaper is classic Foxx: ignore what I've always said and listen only to my election-year pandering. Everyone who has followed Madam Foxx for a nano-second knows she's hostile to Social Security, and I should hope that someone will dig out those past statements. (I would, but I'm trying to skin a different skunk today and just don't have the time.)

Suddenly (if we're to believe her letter in the Watauga Democrat, which we don't), she's the great champion of Social Security. Buffalo dust!

Which reminds us of how she's pulled this kind of stunt in the past. For example, the great Dell computer corporate welfare gambit of 2004-2005. Foxx was serving in the NC Senate when it voted in November 2004 to grant millions of $$ in tax breaks, etc. to the corporation to set up a plant in Forsyth County. But Foxx, who has always publicly said she opposes corporate raids on the taxpayer and who never misses a vote, managed to miss the vote on the Dell giveaway.

Scott Sexton, the Winston-Salem Journal columnist, couldn't dodge the irony of then encountering Foxx's broadly smiling face sitting on the stage when Dell subsequently hosted a tour of the new Forsyth plant. Foxx posed for pictures of herself with Dell's founder, Michael Dell (the picture above).

Sexton made a point of asking her if she'd changed her position on corporate welfare, and you can read how she dodged and bobbed and weaved, trying to get out of the trap she'd laid for herself.

Oh yeah, and how did that Dell deal work out for the taxpayers of North Carolina?
Posted by J.W. Williamson at 2/16/2010 11:17:00 AM
Email ThisBlogThis!Share to TwitterShare to FacebookShare to Pinterest
Labels: corporate welfare, Dell Corporation, Virginia Foxx

Tilson claimed to know where Foxx stood on social secuirty.  Tilson might be the someone you are looking for.  She should have all of those facts handy since she claimed them to be true.  Doubt it though.   I too have been following Ms. Foxx and haven't seen anything that indicates that she is "hostile" toward social security.  And, instead of ranting about Ms. Foxx why don't you have Mr. Kennedy tell us how he plans to save social security form certain collapse which is not the fault of Ms. Foxx by the way.

Your Mr. Kennedy hasn't impressed me as someone that stands for anything.  He is a real good dancer though.  Sadly, his latest radio hosted campaign speech hosted by his own radio program demonstrated that he would bring nothing to Washington.  In fact, his election to Washington, would take away the one of the few rays of real hope we have in Washington.

Foxx SHOULD have it both ways - one way for each side of the mouth she speaks from.

Inquiring Mind: How's that Foxx "hope-y thing" workin' out for ya?

Great!  How is that Obama hope-y-change thing doing for ya?

Clever retort! Somewhat akin to: "Oh yeah? So are you!" The irony used obviously went over your head.
And VIRGINIA FOXX ("Roadblock Ginny") your "ray of hope? Thanks for a harty laugh! :-D

Virginia Foxx is definately against ss. I was at a meeting where she said people needed to be weanedd off of it. I suspect Tilson was right. I'm hoping the paper allows her to respond to Foxx calling her a liar.

I would like to hear Virginia's plan for Social Security.  She outlined all the things that would happened if Social Security is not reformed by doing x, y, and z and then said she would not do any of those things.  Is she just going to let it go bankrupt?

does our sweet virginia ever speak of how social security would have no problems if every administration since lbj had left the money in the bank, instead of using it to pay for their waste, while telling us there wasn't enough cash. has any one ever asked our virginia about this?

RV: Se's worth somewhere between $3 million and $9 million. Do you really think she cares?