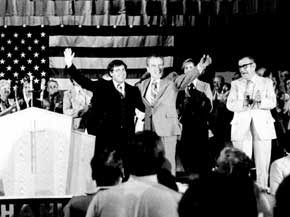 Disgraced politicians have limited options. When they decide to make a reappearance in public, they desperately need to go where they're guaranteed a friendly, even adulatory reception, and a minimum of booing. Which is why Richard M. Nixon in August 1979 chose the tiny (and heavily Republican) mountain town of Hyden, Kentucky, for his first public appearance after being forced from office. That's him on the right in the Hyden school gymnasium, sharing a victory wave with the judge executive of Leslie County, who was running for reelection at the time and was pleased as punch to be standing next to the ex-president. The judge executive happened to be under indictment at the time for fraud and vote-buying.

Birds of a feather.

Thus are the citizens of tiny Woodward, Oklahoma, beside themselves that their invitation to George W. Bush to attend their July 4th celebration tomorrow was accepted. "To actually come to a small community like this, that shows his character," said Kelle Robinson, co-owner of the Sweet Surprises store, which has been turning out U.S. flag cookies. "He's not too good for the common people."

His character? Why, yes. He's being paid for the visit ... to a place where the last surviving Democrat died in captivity decades ago.
Posted by J.W. Williamson at 7/03/2009 10:24:00 AM
Email ThisBlogThis!Share to TwitterShare to FacebookShare to Pinterest
Labels: George W. Bush, Richard Nixon