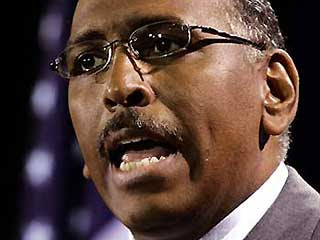 Madam Foxx (R-LooseCannonville) is not the only Republican copying the words of Republican consultants looking for language that will galvanize citizens to run away from the president's health-care reform.

Republican smear merchant Alex Castellanos advised his pay-masters to harp on the word "experiment," and ever the obedient mouthpiece, Republican national party chair Michael Steele used some form of that word over 30 times in about as many minutes.

Dana Milbank was in the room for the ventriloquism.
Posted by J.W. Williamson at 7/21/2009 09:36:00 AM
Email ThisBlogThis!Share to TwitterShare to FacebookShare to Pinterest
Labels: Alex Castellanos, health care, Michael Steele, Virginia Foxx