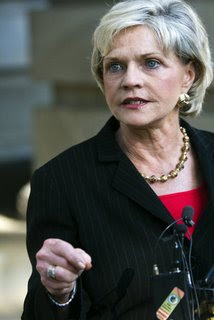 Governor Perdue came out last night and said no way would she support a budget bill that raised taxes on "anyone other than the wealthy" (according to the N&O). She was reacting to a budget deal reached between the N.C. House and the Senate that would slap an across-the-board surtax on all income taxpayers, as well as raise sales taxes. (Republican leaders in the General Assembly accuse Perdue of supporting the proposed increase in sales taxes, which would hit the poor harder.)

Anyway, we're glad to see the Guv start throwing some elbows.
Posted by J.W. Williamson at 7/24/2009 08:55:00 AM
Email ThisBlogThis!Share to TwitterShare to FacebookShare to Pinterest
Labels: Beverly Perdue