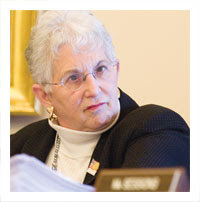 During our years in academe we occasionally ran across some pretentious s.o.b. who insisted on being addressed as "Doctor So-and-So," and we chalked it up to an overweening snobbishness. Or to over-compensation for an actual lack of intellectual heft, or a poor self-image that relished the groveling of underlings.

So this item on Politico about Madam Virginia Foxx was more than merely instructive. She alone among her colleagues in the House of Representatives insists on having "Doctor" prominently displayed on her name plate at her desk on the Rules Committee ... as though that title compensates for her documented loose-cannonism.
Posted by J.W. Williamson at 7/23/2009 09:29:00 AM
Email ThisBlogThis!Share to TwitterShare to FacebookShare to Pinterest
Labels: Virginia Foxx