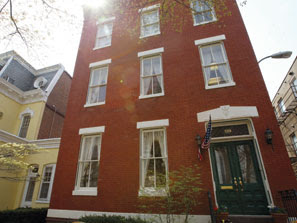 South Carolina's Guv and Chief Hypocrite just can't stop spinning. He distributed an essay to the state's Sunday papers yesterday 'splaining how God was working through his life in a special way, that all that sneakin' 'round was just what God wanted him to do so that he could be exposed (crucified) for the greater glory of the Lard.

Don't know what the Guv was inhaling when he lived in that "Christian" Frat House on C Street in D.C., where other recent strutting Republican adulterers also bunked, but apparently it leads to blessed self-congratulation.

At least the other recently exposed hypocrites like Sen. John Ensign have chosen to remain (relatively) silent. Sanford can't stop yapping about how God has graced him with absolution. Would that God would grace the rest of us with a little gubernatorial silence.
Posted by J.W. Williamson at 7/20/2009 07:55:00 AM
Email ThisBlogThis!Share to TwitterShare to FacebookShare to Pinterest
Labels: Mark Sanford