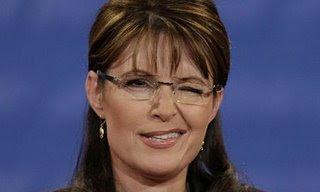 Speaking of Sarah Palin (and how can we not?), Mike Murphy, the veteran GOP operative, characterized the Republican rank-and-file who are head-over-heels in love with the Alaskan Doofus: "People at the grass roots see a charismatic personality who is popular with other people at the grass roots. But their horizon only goes so far as people who think like them." In a column published last Thursday in the New York Daily News, Murphy called Palin a "political train wreck," "an awful choice" for vice president, and her resignation an "astonishing self-immolation."

Murphy's opinion and that of several other Republican political professionals are tallied in today's LATimes under the headline, "Republican Pundits Open Fire on Sarah Palin." Which just makes the Republican grassroots love her all the more and declare that she was sent by God to lead their party out of the wilderness (and onto the frozen tundra?).

What are Republicans in Alaska saying about her since she declared "So long, suckas"? Max Blumenthal catalogs a few of those, including this one:

"Honestly, Sarah's resignation was complete bullshit and I'm saying that as a Republican," a Republican political veteran working in the legislature told me. "In all my years in politics, nobody has left Alaska in such a mess. Everyone here is just shocked." ...

Apparently, it'll take a special session of the Alaskan legislature to untangle the knots, including the Palin unilateral decision to refuse Economic Stimulus money.
Posted by J.W. Williamson at 7/13/2009 01:02:00 PM
Email ThisBlogThis!Share to TwitterShare to FacebookShare to Pinterest
Labels: Mike Murphy, Sarah Palin