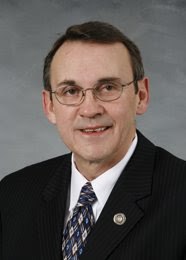 Justin Grimes's two-part series on the health-insurance crisis in Watauga County concludes in this week's High Country Press. (Part I, which focused on the Community Care Clinic, launched here in 2006 as a wholly volunteer free service, was published July 9.)

While Madam Foxx turns a blind eye and a hardened countenance on the need for real health-care delivery reform, our own state Senator Steve Goss emerges in Grimes's second article as a knowledgeable local champion.

The big villain? Blue Cross/Blue Shield of North Carolina, which holds a virtual insurance monopoly in the state. Fined $1.8 million in 2003 for knowingly underpaying some 146,000 emergency room claims, Blue Cross/Blue Shield has most recently been violating the spirit if not the letter of its "non-profit" status by running TV ads opposing the president's health-care reform ideas.

It's outfits like Blue Cross, along with politicians like Madam Foxx, who'll try to frighten citizens into passive acquiescence to the broken system we have, a system that benefits Blue Cross and Madam Foxx immensely, though not the rest of us.
Posted by J.W. Williamson at 7/16/2009 01:22:00 PM
Email ThisBlogThis!Share to TwitterShare to FacebookShare to Pinterest
Labels: health care, Justin Grimes, Steve Goss, Virginia Foxx