What's Up With This Guy? 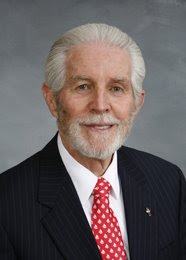 Senator Charles W. Albertson, who represents the N.C. coastal plain counties of Duplin, Lenoir, and Sampson counties, wants to ban the development of wind power in the mountains, because (sez he) "We know that if you put a bunch of windmills up there, it's going to change the aesthetics and mar the landscape."

His bill would actually ban -- ban! -- the practice of hooking wind turbines up to the power grid, so that excess energy can be sold to the Big Boys.

Such a proposed law has prompted some state bloggers to speculate that Sen. Albertson has some coal mine stock tucked away somewhere, or that he represents the worst of an older generation that never left the 19th century, let alone with 20th.

FOOTNOTE
When last heard from on this site, Sen. Albertson was also responsible for blocking a move to increase the number of poultry plant inspectors. Poultry plants are among the more notorious violators of NC labor laws. They also gave Sen. Albertson some $25,000 in campaign contributions.

So Albertson has a history of being something of a dick.
Posted by J.W. Williamson at 7/07/2009 08:45:00 AM
Email ThisBlogThis!Share to TwitterShare to FacebookShare to Pinterest
Labels: Charles Albertson, wind power