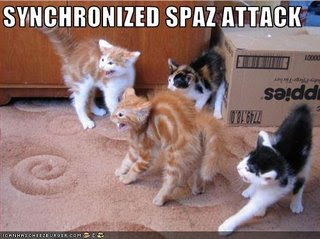 A memo has leaked instructing tea-baggers and other Repub-symps on how to behave when Democratic members of Congress hold their town-hall meetings with voters during the August recess. A few high-points (but follow the link above to see the whole thing):

2. Be Disruptive Early and Often

3. Try to "Rattle Him," Not Have an Intelligent Debate

Democratic members of Congress need to grow a pair and stand up to this bullshit. In fact, go on the offensive against it.

At least Democrats are holding town hall meetings! When's the last time Virginia Foxx stood up anywhere in her district and took questions from voters? We happen to have that date emblazoned in our memories ... January 25, 2006. Two Thousand and Freakin' Six!

She's only brave when she's absolutely sure no one is going to ask her an unscripted question.
Posted by J.W. Williamson at 7/31/2009 05:30:00 PM
Email ThisBlogThis!Share to TwitterShare to FacebookShare to Pinterest
Labels: teabag protest, Virginia Foxx