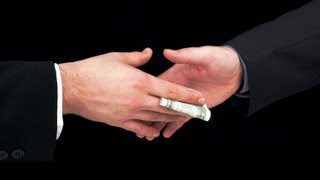 An object lesson in the corruption of big money, involving an amusing example of "pay-to-play" by the American Conservative Union, headed by one David Keene, who has never been shy about strutting his "traditional moral values" along with his "commitment to a market economy." Turns out his moral values are highly sensitive to whatever the market will bear.

Keene tried to extort $2-$3 million from FedEx to support its side with "op-eds and articles written by ACU's Chairman David Keene and/or other members of the ACU's board of directors" in a legislative battle with UPS, FedEx's bitter rival in the package delivery business. When FedEx refused to play (ahem, pay), David Keene began writing those op-eds and articles in support of UPS.

The ACU is denying that it took any money from UPS. Somehow, we doubt that denial.
Posted by J.W. Williamson at 7/17/2009 12:32:00 PM
Email ThisBlogThis!Share to TwitterShare to FacebookShare to Pinterest
Labels: American Conservative Union, David Keene