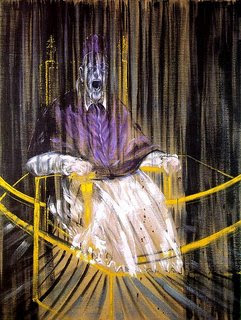 The Catholic Church hierarchy in North Carolina ... what peaches!

The two Catholic presiding bishops have come out against Senate Bill 526, otherwise known as the School Violence Protection Act, because, saith the prelates, if you ban bullying of gays and lesbians, you're on the pathway straight to gay marriage.

Their holinesses thus join up with the Christian Action League and the N.C. Family Policy Council in proposing that it ought to be the constitutional right of every red-blooded American teenager to fatten the lip of any gay kid who gets in his/her way.

The ironies are rife. The church dictum is effed up. And the example of Christ is nowhere to be seen.
Posted by J.W. Williamson at 5/05/2009 11:22:00 AM
Email ThisBlogThis!Share to TwitterShare to FacebookShare to Pinterest
Labels: homophobia, North Carolina Catholics