News From the Matrix 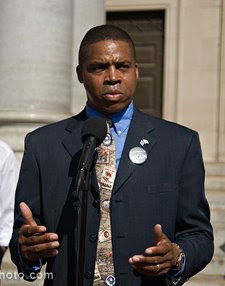 Timothy F. Johnson (left), chair of the Buncombe County GOP, is running for vice chair of the NC GOP and sees himself as an insurgent. He's speaking out against vague "tactics" used to keep folks like him from sitting at the proverbial table. The "Old Guards," he calls them, and they're evidently as shadowy and mysteriously powerful as the Illuminati.

Writes Johnson, "One of the criticism of our party has been the perceived nastiness and underhanded tactics employed by some." That nastiness, Johnson says, has been used against him in his efforts to win the vice chair role in his own party. He alleges that his personal and professional life have been investigated, and false or not-entirely-true allegations have been spread around, sub-rosa.

So, in defense, Johnson has an endorsement from his ex-wife.
Posted by J.W. Williamson at 5/17/2009 02:50:00 PM
Email ThisBlogThis!Share to TwitterShare to FacebookShare to Pinterest
Labels: North Carolina Republican Party, Timothy F. Johnson