The New Face of the Republican Party 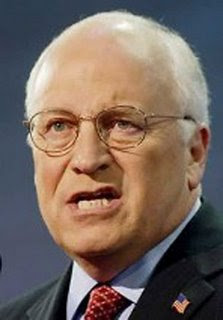 The Party of Torture has its standard-bearer, whether it wants him or not.

They might have chosen Charlie Crist instead, the popular Republican Governor of Florida, who says he's running for the U.S. Senate in 2010, for the seat being vacated by Republican Mel Martinez. But Crist (bless his heart) endorsed President Obama's stimulus plan and had the gall to be seen on the same stage with him, so Florida Republicans (well, some of them, but still) hate his ever-loving guts.

So there's going to be a really nasty Republican primary for Senate in Florida next year, most like, to save the party from any hint of moderation.

You go, guys.
Posted by J.W. Williamson at 5/12/2009 07:58:00 AM
Email ThisBlogThis!Share to TwitterShare to FacebookShare to Pinterest
Labels: Charlie Crist, Dick Cheney