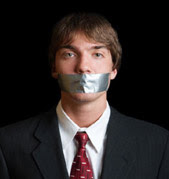 Liberty University in Lynchburg, Va., has revoked its recognition of the College Democrats because the club endorses Democratic candidates, who are (obviously) baby-killers and devil-worshippers.

The club's president received the news via e-mail from Liberty University's vice president of student affairs. The club, which was officially sanctioned just last October, was ordered to stop using the university's name, to hold no meetings on campus, and to stop advertising events.

That same VP for student affairs then told the local Lynchburg newspaper, "We are in no way attempting to stifle free speech."

BWAA-HA-HA-HA.
Posted by J.W. Williamson at 5/22/2009 10:24:00 AM
Email ThisBlogThis!Share to TwitterShare to FacebookShare to Pinterest
Labels: free speech, Liberty University