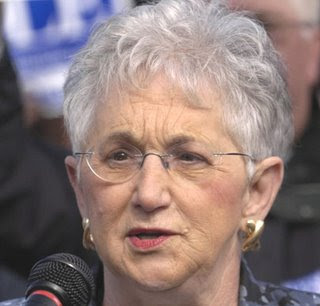 Of the many votes cast by Congresswoman Virginia Foxx that are counter the economic interests of her constituents in the NC-5, few are more breath-taking than her vote yesterday against the Credit Cardholders' Bill of Rights. Only 64 members of the House voted against this law, which will prohibit retroactive interest rate hikes on existing balances and "double-cycle billing" -- charging interest twice for balances paid on time. It will also require companies to give consumers at least 21 days to make their payments, and it mandates a 45-day advance notice of hikes to interest rates, fees, and finance charges. It also strengthens credit card protections for young people.

Madam Foxx said NO to all that, bless her wee little minuscule organ, formerly known as a heart.

Madam Foxx's own Catholic Church, of which she's proud to be a congregant while she's in Washington, D.C., had ancient doctrines against charging interest on loans, and 20+ percent interest is beyond loan-shark abusive. It's certainly beyond what Pope Benedict XIV or Pope Gregory XVI would have countenanced. More ancient Catholic doctrine forbid those who charged interest from receiving the sacraments.

The Catholic Church eventually let that doctrine slide (like a lot of other things). Whatever faith or conscience Madam Foxx still possesses in her half-Baptist, half-Catholic schizophrenia, there's no room for protecting the weak from the ravages of the strong.
Posted by J.W. Williamson at 5/21/2009 09:16:00 AM
Email ThisBlogThis!Share to TwitterShare to FacebookShare to Pinterest
Labels: Virginia Foxx