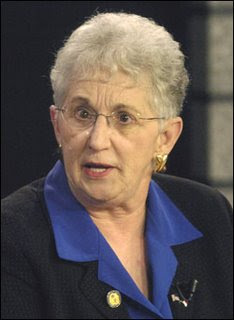 Asked yesterday, Are you worried that the markets are now tanking, after you voted against the financial rescue bill? Madam Virginia Foxx replied:

"No, I'm not. The market may be down, but the Constitution is up!"

Such blissful assurance from The Madam! No agonizing, no second-guessing, no visible nervousness, no discernible concern about the lives and finances of her constituents.

Said Ben Salt, spokesman for Roy Carter, the Madam's opponent in this election, "Foxx's blind belief in an unregulated, greed-is-good ideology that leaves no constructive role for government, combined with campaign contributions from the subprime mortgage industry, have seriously affected her judgment."

For specific instances of that (lack of) judgment at work, try these:

Foxx voted NO on HR 3915, "The Mortgage Reform and Anti-Predatory Lending Act," which would have established licensing and registration requirements for residential mortgage originators and would have provided certain minimum standards for consumer mortgage loans. The bill passed the House with bipartisan support 291-127. (Roll Call 1118, Nov. 15, 2007)

Foxx, true to her species, has usually voted to protect the predators.
Posted by J.W. Williamson at 9/30/2008 08:33:00 AM
Email ThisBlogThis!Share to TwitterShare to FacebookShare to Pinterest
Labels: Roy Carter, Virginia Foxx