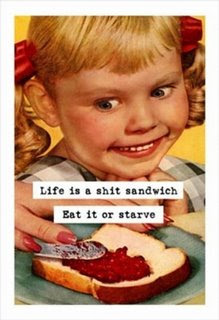 That's the term House Minority Leader John Boehner used to describe the financial rescue package, but he could have been speaking of any number of meals served up in the waning days of the failed Bush presidency.

Just this a.m. are headlines that would have attracted major fainting spells in any normal universe but which, under the present circumstances, get only yawns:

While her congressional leadership all prepare to munch on Bush's failure, Madam Foxx has been signaling furiously that she'll vote against the financial industry bailout. We think we'd join her in that. We think. Hard to know, since the wrong vote could actually be crucial in sending the whole she-bang into some bottomless tank.
Posted by J.W. Williamson at 9/29/2008 10:15:00 AM
Email ThisBlogThis!Share to TwitterShare to FacebookShare to Pinterest
Labels: bank failures, Bush economy, financial crisis, Virginia Foxx