The Madam Loves Her Some Big Oil Companies 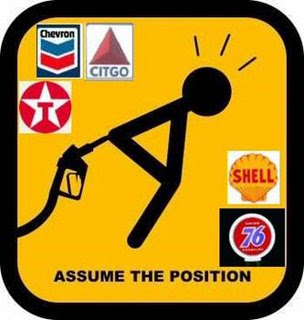 On May 23, 2007, Virginia Foxx voted NO on HR 1252, The Federal Price Gouging Prevention Act. The bi-partisan bill passed the House by an overwhelming margin, 284-141. All seven Democrats in the North Carolina delegation voted for the bill, as did three Republicans, including 6th District Representative Howard Coble. Virginia Foxx voted AGAINST a federal law that would protect motorists from being fleeced at the pump.

That becomes more than pertinent today as station owners across the 5th Congressional Dist. jacked up prices AHEAD OF an expected shortage caused by hurricane Ike.

"My opponent has spent weeks in Washington clamoring for more attention on drilling, instead of coming back to the district for constituent services like the other members of Congress," said Carter. "But when given a choice between defending the interests of the average citizen versus the interests of the oil companies, Foxx votes with Big Oil every single time."

She knows who butters her ample slice of bread!
Posted by J.W. Williamson at 9/12/2008 05:32:00 PM
Email ThisBlogThis!Share to TwitterShare to FacebookShare to Pinterest
Labels: oil industry, Roy Carter, Virginia Foxx