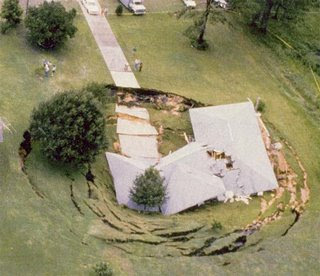 We're beginning to figger out the Republican philosophy for handling the U.S. economy: privatize profits while socializing losses. As in ... Fannie Mae and Freddie Mac. Seems ever more likely that we taxpayers will be saddled with the losses from bad management, while the CEOs and their fellow suits make off with the profits.

But immediately after reading about Fannie and Freddie and little Hankie Paulson, the Bush administration treasury secretary, and their mutual benefit tea party, we also noticed this warning note about the Dell manufacturing plant in Winston-Salem.

The Wall Street Journal is saying that Dell may sell the plant just three years after the corporation received more than $6.5 million in city incentives and nearly $1.2 million in county incentives. There's something called a "claw-back clause" in the incentive deal that would force the company (supposedly) to pay back up-front incentives if it sells or closes the plant before Oct. 2010. If it closes or sells the plant between 2010 and 2015, it's liable for only half the incentives.

That's if Dell decides to honor the contract. A company that needs to downsize as badly as the W-S Journal suggests it does might find ways to get outta town scot free. Isn't that why they have lawyers?

What's up with Dell's cash-flow?

The plant and the employees ... are on the wrong side of an industrywide trend toward slowing desktop sales and surging notebook sales as the price of notebooks continues to fall. Dell has said repeatedly that it has no plans to assemble notebooks at the Forsyth plant, citing much lower production costs overseas.