It Wasn't a Frickin' Stream! 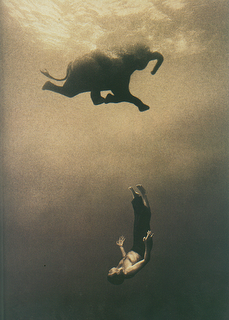 As John McCain was using the financial crisis as a means to save his mortgaged candidacy, and decided to air-drop himself into the negotiations, El Presidente graciously invited both candidates and a host of Congressional leaders in this afternoon to share in the disgrace of his presidency.

For those many voters who told us in 2004 that, although they thought George W. was a bald-faced liar and multitudinously inept, they were afraid "to change horses in the middle of the stream," we wonder how they're feeling now that El Presidente has ridden us into the deep blue sea.

Thrown us into the drink and then announced that we'd have to pay MUCH more for a life preserver and that we needed to pay for it RIGHT NOW.

Treasury Secretary Henry Paulson's original demands of Congress are posted in their entirety here, for your amazement and edification. Be sure to get a load especially of the notorious Section 8, titled "Review," which runs one whole sentence, to wit:

Decisions by the Secretary pursuant to the authority of this Act are non-reviewable and committed to agency discretion, and may not be reviewed by any court of law or any administrative agency.

That's the Bush administration in a nutshell.

Sen. Chris Dodd's counter legislation is also posted here, but we understand that it's been tinkered with further in consultation with U.S. House leaders, so this isn't the final version being discussed this afternoon at the Booby-Hatch (a.k.a., White House).

John McCain's grandstanding about all of this is just this side of pathetic. We're supposed to get BACK on this particular horse/elephant? Gee thanks, but this time I think I'll walk.
Posted by J.W. Williamson at 9/25/2008 08:58:00 AM
Email ThisBlogThis!Share to TwitterShare to FacebookShare to Pinterest
Labels: bank failures, Bush administration, Chris Dodd, George W. Bush, John McCain