The Consequences of Memory 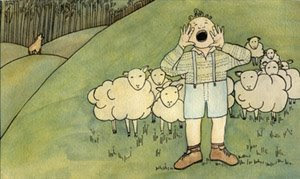 "There really was a wolf here! The flock has scattered! I cried out, 'Wolf!' Why didn't you come?"

An old man tried to comfort the boy as they walked back to the village.

"We'll help you look for the lost sheep in the morning," he said, putting his arm around the youth. "Nobody believes a liar ... even when he is telling the truth!"
--"The Boy Who Cried Wolf"

Reading congressional reaction to the Bush administration's attempt to scare our reps. into agreeing to El Presidente's latest attempt at a massive power grab (a.k.a., the Paulson plan to spend $800 billion hauling Wall Street's nuts out of the brazier), we are strongly reminded of the cautionary tale from kindergarten days, the ending of which is copied above as a life lesson. Our Little Boy in the White House has cried "wolf!" several times too many.

Virginia Foxx (who should know a wolf when she sees one) objected strenuously to the $85 billion bailout of AIG last week, but Foxx says now she's not sure how she'll vote on the $700 billion. If she reads her own quote in the press, surely she'll vote against it: "looks like a blank check with no accountability. Taxpayers deserve better." You betcha, Congresswoman. (Must be a blue moon tonight, since I'm agreeing with The Madam.)

Other N.C. members of both House and Senate are expressing something steelier than mere skepticism. Let's hope their resistance spreads like a virus through Congress:

"I'm not willing to vote for $700 billion to save an industry that comes out just as crooked on the other end. I want real reforms." --Rep. Brad Miller (NC-13)

"Lots of people were asking 'Will there be something in this package for people who are trying to pay off their mortgages but having trouble, and not just people on Wall Street?' " --Rep. Mel Watt (NC-12)

"I just don't like the idea of these corporations, who made all these mistakes, all of a sudden saying, 'OK, Mr. Taxpayer, it's time for you to bail us out. [The Bush administration has] tried to panic the American people." --Walter Jones (NC-3)

"I don't think those advocating for the rescue have fully made their case. I have very serious concerns that this proposal could leave taxpayers holding the bag." --Sen. Elizabeth Dole

"Ultimately, my responsibility is to the American taxpayer, who will be the underwriter of this dramatic proposal." --Rep. Patrick McHenry (NC-10)

Okay, we're reading that the Bushies are compromising on some things, but greater over-sight and accountability...? Dunno. Who does?

Thing is, we can recognize an attempted stampede when we see one, a stampede caused by Grade-A known liars.
Posted by J.W. Williamson at 9/23/2008 02:27:00 PM
Email ThisBlogThis!Share to TwitterShare to FacebookShare to Pinterest
Labels: bank failures, Bush administration, Elizabeth Dole, Patrick McHenry, Virginia Foxx