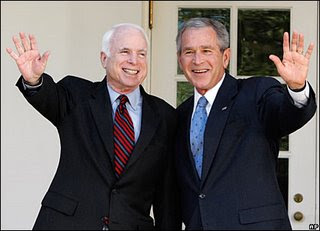 That's the projected cost to taxpayers, adding up what we've already spent on Fannie Mae, Freddie Mac, AIG, and the new $700 billion Congress is being stampeded into passing before anyone thinks too hard and long about what we're doing.

So how do you like Republican Socialism? It's different from other socialisms. It's Trickle-Down. Bailouts for the already rich mis-managers of financial institutions with apparently no strings attached. Even foreign banks get some love but not the individual homeowner with an adjustable rate mortgage.

All of this has made John McCain hop faster and higher than a frog on a griddle. If the man ever did have a set of core principles, they're dust today. Treasury Secretary Henry Paulson has seen to that. McCain was Mr. Deregulator on Monday. He's not that today, or at least not in public.

But back to that $700 billion (maybe more) they're asking us to give to the Bush administration, which couldn't manage the aftermath of a hurricane (make that two hurricanes, if you've checked in on Texas lately) and which invaded a country we didn't need to invade on false pretenses. They don't want Congress asking too many questions about this bailout. They don't want us citizens to worry.