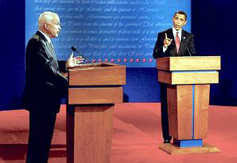 We will make an initial concession re: Barack Obama ... he's greatly improved as a debater. He held his own through a flurry of McCain jabs. But he's still too cerebral, too bloodless for our taste, and repeatedly let McCain's soft, unprotected underside go by without sinking teeth. We'd frankly like more killer instinct in our candidate. I counted seven different versions of "John is right" coming out of Obama's mouth.

Meanwhile, McNasty won on points. He dominated the stage. He also revealed, quite incidentally, a "tell" ... he couldn't look Obama in the eye. Couldn't do it. The one time we noticed McCain's eyes locking on Obama's, "the maverick" looked away quickly. Embarrassed? Why?

Obama SHOULD have said, "Look, if you're gonna say this shit about me, you better look me in the eye."

Obama did get better through the evening. He began to counter-punch effectively. Apparently, McCain's relentless attacks came across to many uncommitted voters as snide and condescending, since most of the instant polling we've seen gave the win to Obama. That's not the debate we watched, but who are we to argue with others' perceptions?

The Big Loser: Gov. Sarah Palin. The nit-wit running mate, who cannot form a coherent sentence unless it's written out for her, was nowhere to be seen last night, though Joe Biden was on every talking-head show there was. Palin has become the BubbleBoy of the McCain campaign. Every time she breaks the hermetic seal on her confinement, she reveals a noggin stuffed with insoluble cotton candy, the beauty queen who can't locate the U.S.A. on a world map.

As we almost got a cancellation on the first debate by a grandstanding McCain going to D.C. to save the day, wouldn't surprise us at all if there's a last-minute cancellation of Thursday's face-off between Palin and Biden. The pretext would be inventive, we bet.
Posted by J.W. Williamson at 9/27/2008 08:17:00 AM
Email ThisBlogThis!Share to TwitterShare to FacebookShare to Pinterest
Labels: Barack Obama, Joe Biden, John McCain, presidential debates, Sarah Palin