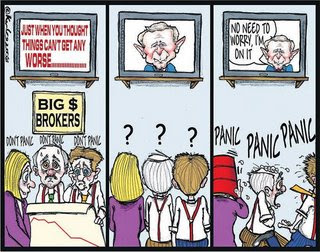 The Big Lesson of the Bush years: the bigger you are, the faster you circle the drain.

John "I know a lot less about economics" McCain has a plan for plugging the drain? How about Sarah "In what respect, Charlie?" Palin?

But, then, neither does Obama. Nobody has a plan (though we suspect a whole bunch of guys and gals with eye shades are getting headaches over it about now).

The question that we would direct in John McCain's general direction: Why would we want the economics philosophy that has dug this gapping hole back in charge of everything for another four years?
Posted by J.W. Williamson at 9/15/2008 09:06:00 AM
Email ThisBlogThis!Share to TwitterShare to FacebookShare to Pinterest
Labels: bank failures, Barack Obama, John McCain, Sarah Palin