What's Behind the NC DemSenate Primary in Asheville?

I paid much attention to Julie Mayfield in 2019. She was one of the Democrats who was running for Terry Van Duyn's NC Senate seat (SD49). Van Duyn was leaving to run for lieutenant governor in the 2020 Democratic primary. Mayfield, a noted environmental activist (MountainTrue) and Asheville City Council member, had amassed a legacy of community organizing and eleemosynary defense of the defenseless, so she won the 2020 primary and subsequently easily sailed to election to the NC Senate. SD49 leans heavily Democratic (61.4% Democrat, according to Dave's Redistricting; D+8 according to NC FREE), so whoever wins this primary likely takes the seat. The District takes in half of Buncombe County, the half with Asheville.

So what's up with Julie Mayfield's first term that she's drawn not one but two primary challengers, two women, one young and white, Taylon Breeden; the other Black and a newly elected Asheville city councilwoman, Sandra Kilgore, who takes a surprising position on the removal of the city's memorial to white supremacist Zebulon Baird Vance. But why kick out Mayfield? Because of a particular vote? An unpopular position? No tea or coffee for visitors in her outer office?

I profiled Mayfield in June 2019: "[She] got her law degree from Emory University in 1996, which apparently fueled an inherent gene for pro bono and public good advocacy. She directed the Turner Environmental Law Clinic at Emory University School of Law where she represented environmental groups, civic associations, and individuals in public interest environmental law cases. From 2003 to early 2008, she was Vice President and General Counsel for the Georgia Conservancy. She arrived in Asheville in 2008 and by 2011 she was appointed by Governor Bev Perdue to the Mountain Resources Commission, where she served until the legislature dissolved the Commission in 2013. She also served on the North Carolina Conservation Network board for six years, chairing it for two."

Hell, she even prides herself on being a "non-theist."

In trying to understand the undercurrents behind this primary, I stumbled on a truly revelatory Facebook livestream of a joint appearance/interview with Lauren Stein. It's archived on YouTube as "NC Senate 49 Forum," and it was well worth its long running time (even though for the first 20 minutes, it's a comedy of errors as Julie Mayfield attempts to conquer the technology and join the livestream. When she finally gets on, however, she brings clarity, informed common sense, and further confirmation that she's waaay qualified to be representing Buncombe in Raleigh).

Taylon Breeden is obviously Mayfield's chief rival in this election. She's a champion for the working class and one sharp tack. She began to remind me of AOC for her charm mixed liberally with progressive grit and a bracing bluntness. I'd describe her as a left populist, and there's nothing muffled about her vision of what's gone wrong for working people. I found her compellingly informed on the details of legislation, particularly the legalization of hemp farming. She owns a hemp extraction lab and company, Simply Extract, which produces CBD oil. She recently opened a new business in downtown Asheville, The Pot Stirred, which features beverages infused with CBD and mushrooms — categorized as Buzzed Brews and Herbal Potions -- and a rotating menu of CBD and Stay Glazed Donuts. But don't let that joking airiness about the devil herb mislead you. There's nothing joking nor airy about her policy sharpness and determination to shake things up.

Breeden's most aggressive challenge to Mayfield involves "transparency" in that she has alleged that Mayfield, along with many other Democrats in Raleigh, have let themselves get stuck in Duke Energy's "back pocket," a charge that Mayfield vigorously defended (and I believe her). Like the Bernie bros I have known, Breeden has no use for "incrementalism," working for the small things you can get when you're in the vast minority as Democrats are in the General Assembly. But Mayfield has shown herself capable, particularly in being one of four Democrats who helped negotiate and make better the governor's landmark Clean Energy Plan, which he signed last October, the first such law passed by a majority Republican legislature in the South.

Somewhat outclassed and out-gunned in the "NC Senate 49 Forum" was Sandra Kilgore. Forum host Lauren Stein (who's as well informed, as blunt in her questioning as you could hope any national broadcaster might be -- but usually isn't) asked Kilgore what she was doing running for higher office barely a year into her first term on the Asheville City Council, a question Kilgore wasn't ready for. While Mayfield and Breeden were armed with facts and details, Kilgore waded safely in the shallow water of vague generalities (often "glittering").

The one thing that stands out about Kilgore was her opposition to the removal of the Vance obelisk from Pack Square. She wanted it "repurposed" rather than torn down, since it copies what was actually an ancient Egyptian symbol of the  sun god Ra. Kilgore wrote on mountainx.com, "That makes the architectural form 13,000 years old. It symbolized the concept of duality and balance. Obelisks are thought to represent good energy and dispel negative forces."

The Vance obelisk was designed by Richard Sharp Smith, the supervising architect of the Biltmore House, and was modeled on the Washington Monument, and to Kilgore (to me too) worth saving as an Asheville landmark with no visible connection to white supremacy (like a bronze Confederate soldier gripping a gun). Kilgore evidently felt that the fury about white supremacy after the killing of George Floyd divided her community unnecessarily, and she observed that white elites were often the source of telling the Black community how it ought to feel about the monument. 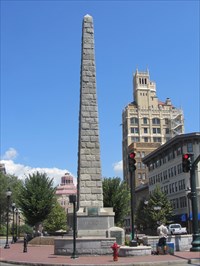 Kilgore's position is perhaps too nuanced and sophisticated for many liberals, but I was both surprised and enlightened by her taking that stand. She's a poised presence, and though she seemed out of her depth in the forum, her cosmopolitan vibe comes from a career as an international traveler, a flight attendant for British Airways. It's hard to rattle an experienced flight attendant. Since returning to Asheville (where she grew up) to take care of aging parents, she's opened her own real estate business catering especially to the Black community.

Mayfield can win this primary, though Breeden is going to have a following, and whatever happens, I believe Asheville is well stocked with coming powerful political women. Breeden and Kilgore both have much to offer, and I could hope that they'll stay leaders in the community. Anyway, after watching Lauren Stein's Facebook forum, Asheville seems even luckier to me for its abundance of intellectual talent.