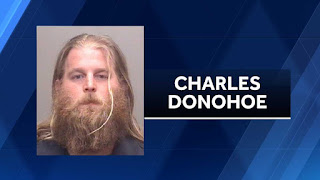 Charles Donohoe of Kernersville was the North Carolina chapter president of the Proud Boys, the far right bullies who according to federal authorities conspired to keep Donald Trump in the White House. Following the 2020 election, Donohoe became leader of a Proud Boy inner circle called "the Ministry of Self Defense," which was planning the breach of the Capitol on January 6th, 2021, and he was a recruiter of other Proud Boys to join the effort.

As of yesterday, he has pleaded guilty to felony charges for his actions and will testify against other Proud Boys who have been charged but who pleaded innocent.

Donohoe has been held in custody since his arrest over a year ago in March of 2021.

Donohoe's movements on January 6th are well documented. These details come from the Department of Justice press release yesterday:

On Jan. 6, 2021, Donohoe was part of a group of 100 or more Proud Boys who marched away from a rally near the Washington Monument towards the Capitol. Shortly after 12 p.m., the group was assembled two blocks west of the Capitol, and Donohoe understood that other Proud Boys leaders were searching for an opportunity to storm the Capitol. At approximately 1 p.m., the group arrived at the Capitol and began breaching the barriers surrounding the Capitol grounds. While in the West Plaza of the Capitol, Donohoe threw two water bottles at a line of law enforcement officers who were attempting to prevent the mob’s advance in the West Plaza at the Capitol building. As events continued, Donohoe joined with a crowd, including other Proud Boys, to push forward to advance up the concrete stairs toward the Capitol. The crowd overwhelmed law enforcement officers on the stairs, continued toward the Capitol, and ultimately entered the Capitol building after Donohoe’s co-defendant, Dominic Pezzola, allegedly broke open a window of the building.

Posted by J.W. Williamson at 4/09/2022 07:00:00 AM
Email ThisBlogThis!Share to TwitterShare to FacebookShare to Pinterest
Labels: Charles Donohoe, Trumpism