Is Katie Dean Rising in the DemPrimary for CD11? 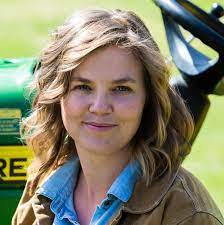 I've had kind of a crush on Katie Dean since I first watched her campaign video (YouTube), and not the kind of crush old white men are known for, but a political crush, because I thought she "fit" the 11th Congressional District better than the other candidates and that her candidacy could catch fire and roll over all expectations and win.

I wanted to interview her a month ago and proposed an email exchange, but I never heard back from her. Either the message didn't get through, or my being cut out of the 11th CD -- after being led astray into false hope by a map that drew Watauga into Maddy Cawthorn's district -- so my opinion didn't matter any more. Plus who the hell is this guy at WataugaWatch anyway?

I wanted to probe Dean's working-class perspective, what her knee-jerks sound like, and whether there was any good reason I couldn't support her as a "moderate" Democrat. I've done it before, plenty. Though I like radicals, I'll vote for any Democrat over most Republicans because party does mean something most of the time. The Republican Party is a horror show. The Democratic Party is a trainwreck -- going off the rails trying to accomplish something idealistic. Take your pick. I have.

Anyway, and though I can't vote for Katie Dean or anyone else in the 11th, I'm watching her apparent rise (maybe?). People I respect and who have run as Democrats for public office have endorsed Dean -- Moe Davis, who ran for the 11th in 2020 (I contributed to his campaign) and David Wheeler who ran for the NC Senate in 2018 against mastodon Ralph Hise and wasn't afraid to take a lance to that immense mammal. Wheeler lost. But he has some street-fighter in him, and so does Moe Davis, and I approve of that. Together Davis and Wheeler have come out strong for Katie Dean under the aegis of FireMadison.com, a social media gadfly that has never for a second let up on Cawthorn.

Davis and Wheeler make the argument that Heath Shuler ought to have taught us something, for Heath Shuler was the last Democrat to win the district and he was a moderate notorious moderate with a conservative streak that outraged the activists in Asheville. Outraged me too. But he was better than Mark Meadows turned out to be, so party does matter and I ain't no purist.

Katie Dean is the only working-class gal running, with auto grease under her fingertips -- owns a successful auto repair business, can put a timing belt on a GMC. It's that and the obvious intelligence of an accomplished woman who studied how to design municipal infrastructure and has a degree in environmental engineering and who once declined anesthetic for repairing a broken collar bone because she couldn't afford insurance -- all that would make me vote for her too.