A David Up Against Goliath Ralph Hise 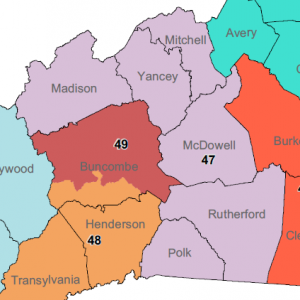 Democrat David Wheeler is running to unseat a big Republican dog in the NC Senate, Ralph Hise from nearby Spruce Pine. Senate District 47 is a difficult mix of mountain and lowland counties that wraps around Buncombe to the north and east, including all of Madison, Yancey, and Mitchell on the Tennessee border, continuing southward through McDowell, and concluding with Rutherford and Polk on the South Carolina border. Whew! How would you like to campaign over that bumpy ground?

The bulk of the population in District 47 lives in the lowland counties. Rutherford alone has more people than the three mountain counties of Madison, Yancey, and Mitchell combined. Both Democrat Wheeler and the incumbent Republican Ralph Hise live in Spruce Pine in Mitchell County. The winner this fall might be the man who hustles the most in the "downhill from home."

David Wheeler looks for all the world like he's hustling votes. His Facebook feed suggests that he's mounted an active and aggressive campaign, and he got some earned media in the lowlands last month when he got asked to leave the controversial Word of Faith church in Rutherford County. That church has been a Rutherford County scandal for years, essentially enslaving and abusing its members and being winked at by local government including state Senator Ralph Hise. Wheeler's was a bold move that got him noticed. Will it also get him votes?

Incumbent Hise has set himself up for a massive fall. He's one of Senate boss Phil Berger's best boys, very active in attempting to gerrymander the North Carolina judiciary and to squeeze ballot access into something that might fit comfortably into his coat pocket. He is trailing a history of questionable and illegal campaign finance practices. As of February of this year, the NC Board of Elections and Ethics Enforcement was still investigating complaints filed against Hise in 2017, and I can't find any evidence that Ethics enforcement has ever reached a conclusion.


The original complaint against Hise, filed in March of 2017 by activist Greg Flynn, detailed a variety of errors and omissions in Hise’s campaign disclosures. They include:

✿ Required information about campaign contributors – including employers and addresses – were missing from the reports.

✿ A failure to report more than $9,000 that nine political action committees reported making to his campaign over a four year period.

✿ A failure to provide itemized information on thousands of dollars in campaign disbursements.

If there ever was an incumbent hog feeding at the trough, it's Hise, and he needs to go. David Wheeler might be the candidate to send him packing in a year like 2018.